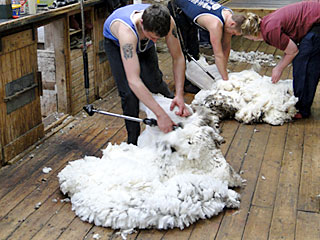 Strong wool prices were at the lowest level recorded this decade while shearing costs accelerated, a trend that would only continue. Returns were “absolutely dismal” and that situation was unlikely to improve significantly until existing stocks had cleared, the report said.

Wool had built up throughout the pipeline with in-market stocks elevated, local wool stores full and product starting to pile up in wool sheds.

“At some point the environmentally sustainable values of wool will drive improved demand, but until we are able to find a way to tell this story to a wider audience this product will remain undervalued,” the report said.

The younger generation, generally much more environmentally conscious, were not yet the ones making the decisions on what carpet was laid in homes; most of them were still renting and were likely to become home owners later than previous generations.

The 10%-15% house price falls the bank was predicting might help with that in the big picture but would not do anything to persuade owners to upgrade carpets in the meantime.

Local wool auctions stopped through April and much of May, which had contributed to the backlog of wool but that was not the underlying problem, it said.

The bigger problem was that contracts for wool sold earlier in the year were now being reneged on due to a lack of end-user demand. Until end-user demand started to improve, it would not really matter whether or not wool was auctioned in New Zealand.

Auctions kicked into gear again in late May and, at last week’s South Island sale, PGG Wrightson Wool said the market settled on levels similar to the previous sale for most crossbred types, after a nervous start.

The sale marked the first of the new season’s mid-micron wool, mainly from Canterbury, and the excellent offering attracted strong demand.

The ANZ report said fine wool was not expected to escape the current downturn; it was used in a range of high-end fashion and functional products but those tended to be relatively expensive.

“This environment will certainly test the marketing skills of those selling fine wool products to consumers. These companies have had an excellent track record so far, so hopefully this can be maintained going forward.”