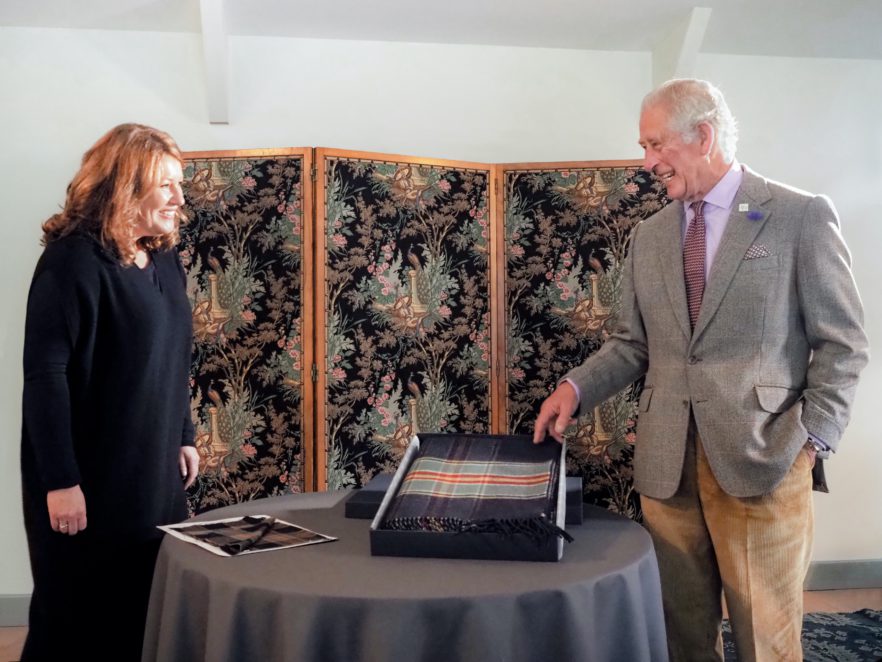 This year is the Campaign for Wool 10th Anniversary, the Campaign officially began in October 2010 with Wool Week activities and is a truly collaborative initiative involving farmers, textile manufacturers, carpet makers, brands, retailers, fashion & interior designers and artisans from around the world. Wool Week takes place each October to celebrate retailer collaborations, and each year over the decade a variety of pop-up events and activities have taken place.

To celebrate Wool Week Johnstons of Elgin Chairman Jenny Urquhart presented His Royal Highness The Prince of Wales with an exclusive woollen blanket featuring the new Queen Elizabeth Scholarship Trust (QEST) tartan.⠀
⠀
The 100% wool blanket features an enlarged scale of the new tartan designed by Kinloch Anderson, and manufactured by Johnstons of Elgin, in a collaboration between two of Scotland’s oldest family textile businesses. Proceeds from the sale of this new tartan will be donated to QEST, a charity dedicated to excellence in British craftsmanship. HRH is Patron for both the Campaign for Wool, which celebrates its 10th anniversary this year, and QEST who mark their 30th anniversary.⠀
⠀
For decades His Royal Highness The Duke of Rothesay has highlighted the benefits of wool and natural fibres which have an important part to play as we face the enormous challenges of climate change.

The Campaign For Wool 10th anniversary timeline by Christopher Corr

The Campaign For Wool is celebrating its tenth anniversary with the launch of a series of artwork pieces, in the style of the Bayeux Tapestry, created by artist Christopher Corr. Bright and beautifully detailed, each piece has more to see the more you look at each painting. Launched in a virtual gallery tour, with individual hotspots of information for each piece to summarise the activities captured in each of the paintings. In addition, there are clickable files; an audio file with Nicholas Coleridge narrating the timeline; and a short film capturing Christopher Corr discussing how he worked on the project and the importance of sheep in his artistic career.

Truly collaborative, the Campaign initiative involves sheep farmers and woolgrowers, textile manufacturers, carpet makers, brands, retailers, fashion & interior designers and artisans from around the world. Over the last ten years, The Campaign For Wool and HRH The Prince of Wales have endeavoured to raise public awareness around the benefits of wool as a natural, renewable and biodegradable fibre.

“I am delighted to introduce you to this remarkable project, telling the unfolding story of the first 10 years of the Campaign For Wool. The bold colours, and his witty educated eye made Christopher, in my opinion, the obvious and ideal person to record the events and initiatives of the Campaign. With 19 pieces in the series they capture key events and activities around the world, along with wool’s biodegradable and flame retardant properties.” Nicholas Coleridge Chairman of the Campaign for Wool

“I was invited to make a series to celebrate the 10 years of the Campaign for Wool, a narrative of the different events all over the world and activities including sheep and wool producers and brands and retailers. I work spontaneously, with colour to reflect world environments, for each image I made I used a different colour, and there is a design link to all of them. Sheep naturally come in so many colours, and varied shapes and I was glad to show that. Before starting the project, I found an etching of a sheep that was created during my Manchester studies a number of years ago, and one of my final projects before going to the Royal College of Art was all about sheep.” Christopher Corr