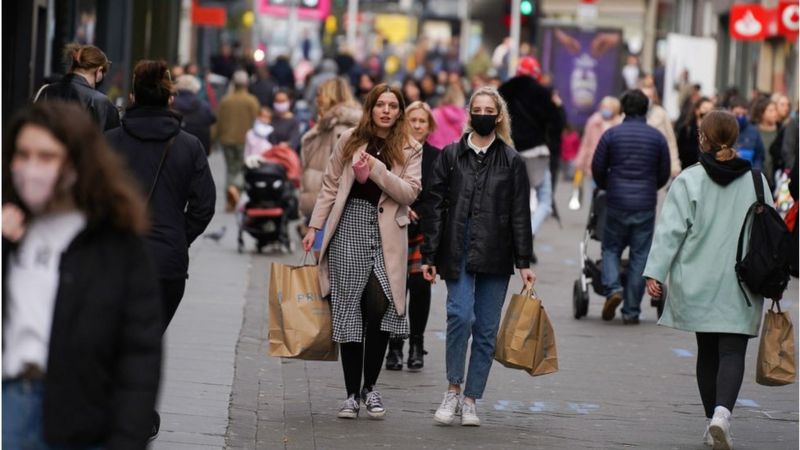 Retail sales in Britain rose for the fifth month in a row after they were boosted by non-food items such as DIY and garden supplies, official figures revealed today. Sales volumes rose by 1.5 per cent between August and September, which was almost twice the size of the previous month’s increase of 0.8 per cent.

Fashion stores continue to struggle and could miss out as restrictions limit the Christmas party season, but food and DIY remain popular and the shift to internet orders saw 27.5 per cent of sales online, compared with 20.1 per cent in February.

The Office for National Statistics (ONS) data released this morning also revealed that sales are now 5.5 per cent higher than those seen in February, before the pandemic.  Retail sales volumes are also now 4.7 per cent higher than a year earlier, taking the annual rate of increase above all forecasts in a Reuters poll of economists.

The ONS data also revealed that in the three months to September, retail sales volumes increased by 17.4 per cent when compared to the previous three months.  This made it the biggest quarterly increase on record as sales picked up from record-low levels experienced earlier in the year, according to the statisticians.

However, fuel sales volumes last month were still 8.6 per cent below February with reduced travel as many continued to work from home. Jonathan Athow, the ONS deputy national statistician for economic statistics, said: ‘Retail sales increased again in September, the fifth consecutive month of growth since the record falls seen at the start of the pandemic. ‘Clothing store sales have been slower to recover and fuel sales remain subdued as people continue to work from home and have reduced the amount they travel.’

Strong household demand has been the mainstay of Britain’s recovery from the initial shock of the coronavirus lockdown, when output contracted by 20 per cent, more than in any other major advanced economy.

Britain’s economy is set to record a rapid rebound for the third quarter, but rising coronavirus restrictions are damaging consumer morale and weighing on the broader economy. Thomas Pugh of Capital Economics said: ‘Total consumer spending will probably start to stutter over the next few months as the furlough scheme ends and unemployment rises, despite the increased generosity of the Job Support Scheme.’

British consumer sentiment fell this month by the most since a slump at the start of the coronavirus pandemic as lockdown restrictions tightened across the UK. Helen Dickinson, chief executive of the British Retail Consortium, said: ‘The retail recovery remains fragile as the industry enters the all-important Christmas period, with November and December typically accounting for over a fifth of annual sales.

‘While food and online retail continued to show strong growth, high street shopping has struggled in recent months, with footfall still down by over a third. Tighter Government restrictions have taken their toll on fashion and beauty sales, while home office and computing equipment has benefitted.

‘Retailers have spent hundreds of millions to make stores Covid-secure and keep staff and customers safe. Furthermore, they are encouraging the public to shop early for Christmas and prevent the last minute rush, so that everyone – from shoppers to warehouse workers – have the space they need to stay safe and well.

‘Retail has proven itself to be a responsible industry during this pandemic, and Government should not risk the retail recovery by closing stores during the all-important run up to Christmas.’

Richard Lim, chief executive of Retail Economics, said: ‘Growth in retail sales is beating even the most optimistic expectations.

‘Consumers have proved extremely resilient as cancelled holidays, fewer trips out and less commuting have boosted discretionary spending power to the benefit of some parts of the retail sector.

‘Christmas 2020 is going to be like no other and we’re also likely to be seeing signs of consumers starting their Christmas shopping earlier.