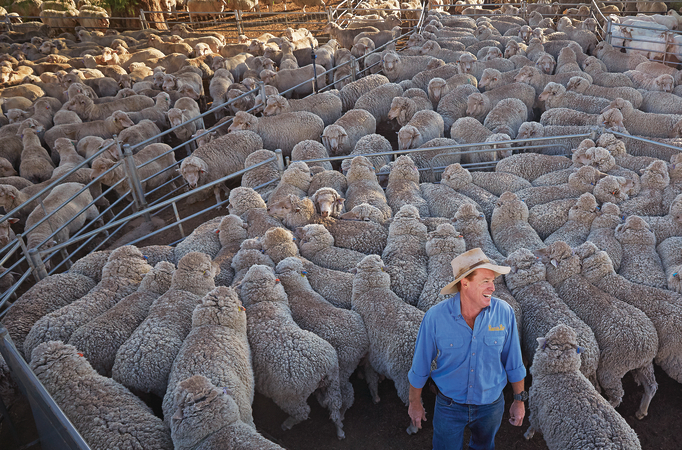 In its monthly briefing the Australian Wool Innovation outlines issues around the testing, NWD, prices, logistics, and exports. The briefing states that the month of March has for the last 10 years, seen most significant upswing in volume of Australian wool tested. Year on year, 25% more wool has been tested though the Australian Wool Testing Authority (AWTA) in March, albeit with the month having the maximum possible working days of 23 per month. As of the end of March 2021, the AWTA had tested 0.9% less wool compared to the same period last season. Before the release of the April key test data, there is solid information suggesting that the April figures are tracking to the same growth in wool being presented for testing. The Australian Wool Production Forecasting Committee’s (AWPFC) fourth forecast of shorn wool production for 2020/21 is 290 mkg greasy. This is a 2.1% increase on the 284 mkg estimate for 2019/20 as key wool growing regions experience favourable seasonal conditions.

The latest information from AWEX sees the national average of 68.4% of NWD being completed. All states except for WA are 70.5% and above. The smallest production states of Qld and Tasmania are at the top of the list and at almost 80%. 12.8% of the national clip is difficult or can’t be declared fully under the NWD by being presented as bulk classed or interlots. A figure of 87% NWD made could be assumed as May 2021 “100% fully compliant” to all best of intentions under that assumption. If the WSA areas where most of bulk classing is undertaken eg N99 (Sydney) in NSW and V99 (Melbourne) in Victoria then the acceptance of filling out the NWD by wool growers would be above 80% in most states.

Wool prices have continued to consolidate since the commencement of 2021 with the EMI averaging a solid 1285ac clean/kg. Since the New Year, the EMI has maintained an increase of 15.9% (184ac). In US dollars, the advance has been even greater because the AUD/USD pair favoured a strengthening AUD side of the pair. An 18.7% or 164usc gain in the US value of wool has been registered.

Logistics issues continue to be the wild card currently impacting the trade of wool (and other export goods). Skyrocketing transport charges across the globe are forcing inflationary pressure on consumer goods. Access to timely vessel departures and delivery are becoming more problematical each week. Unprecedented congestion levels at empty container parks across Australia are ongoing. Backlogs are causing delays in import container de-hiring, and there are problems associated with getting export empties, as well as challenges in redirections and queuing of trucks. All Chinese ports are congested and the additional average waiting time is two or three days on both sides of import/export operations. These shipping issues are primarily responsible for holding up exporter’s funds to allow further spending at auction. Vessel bookings made in advance are often subject to trans shipments being added at the last moment, rather than the direct sailing. This also will add a week or two to delivery time. The shipping disruption obviously effects the main export destination of China but harder impacts are being felt upon the Indian and European importers. Available vessels setting sail for those nations are much scarcer than Chinese bound vessels and the space available on those limited vessels is ever tightening. As the market has shown, when those nations are in the room competing, the wool price is the beneficiary of that additional bidding.

The month of February 2021 saw Chinese imports of Australian wool hit over 24.2mkg – a staggering 64% more than February of last year. Exports to China now account for 87.2% of all Australian wool being exported. According to the ABS, as at the end of February 2021, there has been 11 countries importing Australia wool in the greasy raw form, with another 13 taking semi processed wool, making a total of 24 countries. Perhaps the most significant data from the ABS figures shows that just 9.7% of all exports are greater than 23.9 micron. The AWTA tested data shows around 18% of all wool tested is in that range so it can be assumed that a much greater percentage of the grower and buyer held stocks in Australia is in the crossbred micron areas.