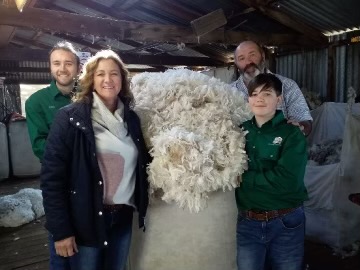 The Australian Fleece Competition is the largest fully measured fleece competition in the world, attracting more than 400 entries from 145 exhibitors.

Unfortunately the 2021 Australian Sheep and Wool Show was cancelled for the second year in a row due to the recent restrictions in Victoria caused by Covid.

“Fortunately the Australian Fleece Competition wrapped up before the restrictions were put in place, but it’s still very disappointing for all the sheep breeders, wool growers, industry stakeholders and commercial producers who were planning to make the trip to Bendigo,” said Ms Cordy.

This is the second Grand Champion title awarded to Conrayn Merino Stud, who also won in 2010.

“We are thrilled with this recognition. The winning rams fleece was sired by our Sydney Supreme from 2018 (Thor), the reserve ewe was sired by the Australian Sheep and Wool Show Grand Champion ultrafine for 2016 (Ford),” said Peter Lette.

“It’s very disappointing that the rest of the Show had to be cancelled, but we hope to see everyone in 2022.”

The Champion Commercial fleece was exhibited by L & M Harris from Costerfield in Victoria with a 20.1 micron fleece entered in the Fine Medium Merino Ewe/Wether section, scoring an impressive 92.83 points.

JD & RE Humbert, Kedleston Park were this year’s Performance Class winners, which caters for exhibitors shearing in six to eight-month cycles commercially.

Almost two thirds of the fleeces on show were donated by exhibitors to be auctioned at the competition of the competition to raise funds for this year’s nominated charity the Motor Neurone Disease Association. More than $178,000 has been donated back to various charities since its inception.

All competition fleeces were weighed and sampled for objective measurement (including length and strength), under standard procedures of the Australian Wool Testing Authority.