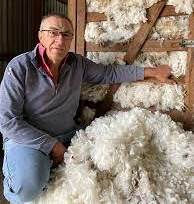 Mr Laurie’s letter is as follows:

On behalf of Australian woolgrowers, I would first like to thank the immediate past Chairman Ms Colette Garnsey for her contribution to the wool industry through her role as Chairman and as a director of AWI. Colette’s understanding of the industry beyond the farm gate has been of great value to the industry.

Stepping into the role of Chairman, I feel honoured to be given the opportunity to lead AWI given its critical role in supporting an industry I have been involved in all my life. I am a grazier from Walcha and Merinos are the backbone of my enterprise. They provide multiple income streams and have been very good for my family business over several generations.

An important part of my role as Chairman is to ensure that AWI is listening to woolgrowers and other stakeholders about the issues that concern them, acknowledging those concerns and making sure they are discussed at board level, and then agreeing on a plan to address the issues. Everybody should have a voice, everybody should be heard and all views should be taken seriously. I am listening and AWI is prioritising and addressing key issues for the industry.

The first area of concern is the impact of COVID on the global market for wool. With the decline in demand for clothing due to lockdowns, AWI held back a lot of its marketing funds until a time when people started spending again. China was the first country whose economy recovered, so we invested in a big campaign there that resulted in strong demand. Other economies such as the UK are now recovering. It is absolutely crucial that we make sure that wool is front of mind of consumers when they return to buying clothes.

COVID and growing concerns about the environment have focused consumers’ attention on the eco-credentials of products and we are doing more to increase people’s awareness of wool’s natural, renewable and biodegradable benefits. A worrying issue is the environmental impact labelling proposals in the European Union that, counter intuitively, would rate wool poorly in comparison to man-made plastic fibres. We are putting a lot of effort in the EU to help ensure that wool is considered by the authorities correctly and appropriately.

In the on-farm area, concerns about a lack of shearers have been exacerbated by COVID, with some uncertainty as we head into spring. AWI already funds a lot of shearer and wool handler training but the industry needs more. It’s very important that we get novices involved and get them trained, but also get them into work and give them support during the following few months so they can go from shearing a handful of sheep to getting some more competitive numbers, so they can make a living.

Flystrike management is the other big concern in the on-farm area. It is a critical issue and we have recently approved an extra $650,000 to fast-track the potential development of a commercial vaccine. AWI is an R&D and marketing company, so we fund research and provide tools, options and market information to woolgrowers so they can make up their own mind as to how best to manage flystrike on their property. It’s not up to AWI to tell any grower what they should or shouldn’t be doing; we will support growers’ right to make up their own mind.

These key marketing and R&D issues for the industry, and many others, need investment. But AWI has been hampered in the past couple of years in this respect.

Our total revenue is to a large extent dependent on income from the wool levy, which has more than halved during the past two years due to the reduction in the wool levy rate from 2% to 1.5%, the unsettled EMI, and the fall in Australia’s wool production caused by the drought.

AWI operates in a lean, efficient and transparent manner, but just like any business with a reduced income, we had to make cutbacks in staffing and projects. We are dipping into the reserves which the company has built up during past years for tough times like right now. But continued drawing down on our reserves is not sustainable in the long term. Reduced revenue equates to reduced investment.

Our industry has many opportunities but also many challenges. I assure you that I will work to ensure that AWI, your R&D and marketing company, will operate in the interests of you the woolgrowers of Australia that help fund AWI, and ensure the best possible results with the available resources.