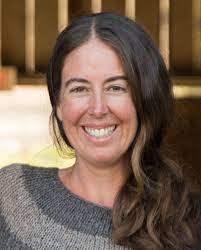 Alongside Rebecca, winners of the “Climate Leaders” include Prama Bhardwaj of Mantis World, Helene Smits of Recover, and Margot Lyons of COYUCHI, as well as “Rising Stars” Annabelle Georgina Hutter of Säntis Textiles and Landon Nash of Tact & Stone.

The annual awards have been established in memory of the late Ryan Young, Textile Exchange’s Chief Operating Officer from 2017 to 2020, and the driving force behind the organization’s Climate+ Strategy.

Rebecca Burgess has two decades of experience working at the intersection of ecology, fiber systems, and regional economic development. She is the author of the best-selling book Harvesting Color, a bioregional look into the natural dye traditions of North America, and Fibershed: Growing a Movement of Farmers, Fashion Activists, and Makers for a New Textile Economy released in 2019. She has taught at Westminster College, Harvard University, and California College of the Arts. She also holds a new board position at the Livestock Conservancy and is serving on the leadership council of the Center for Regenerative Agriculture and Resilient Systems at Chico State University.