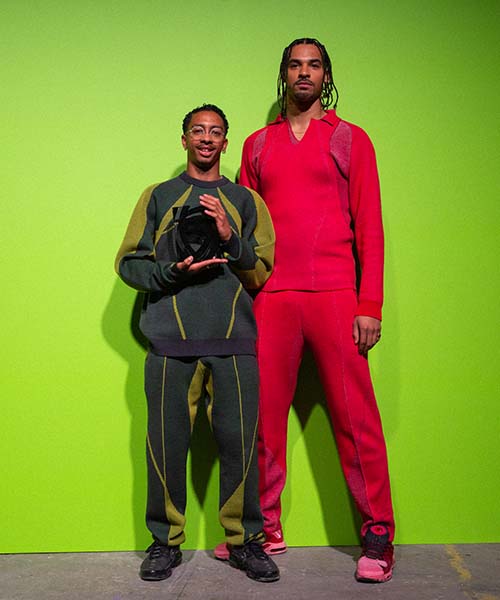 “I can’t describe how much this means to me. I just want to thank, so much, the Woolmark team. You’ve changed the trajectory of my life,” said Saul Nash as he was awarded 2022’s edition of the International Woolmark Prize.

The prize, funded by the marketing arm of Australia’s 60,000 Merino wool growers, not only comes with a life-changing sum attached—$144,000—but has a long and rich history of altering the trajectory of some of the world’s best-known fashion designers. Famously, accepting his third place award in an early version of the prize was the reason a then 16 year-old Yves Saint Laurent first visited Paris.

Nash joined that pantheon, along with the South African designers Maxwell Boko and Mmuso Potsane, whose label Mmusomaxwell was awarded the Innovation award—and the $72,000 that comes with it—that is named in honor of another famous past Woolmark winner, Karl Lagerfeld. After their win was announced by co-judge Carine Roitfeld, Boko took to the mic and said: “I always wanted to be a musician. So this is our best new artist Grammy!”

The judging panel included Sinead Burke, Edward Enninful, Pieter Mulier, Riccardo Tisci, and Nadège Vanhee-Cybulski. The standard of work was universally high—so the only significant differences between them were the specifics of their individual stories and practices.

As Burberry’s creative director Riccardo Tisci said of judging: “It’s horrible!” He added: “Because I’ve been there before, and there are so many boxes you have to tick; the creativity, the awareness… It was very difficult to judge today. But Saul Nash’s roots in dance and hip-hop and the way he translates the clothes worn by a dancer, which are typically acrylic, into this fiber was beautiful to see. And Mmusomaxwell, these two kids from South Africa, delivered this amazing, couture, well-made collection. It was a great judging table also, and we discussed a lot, and we found a point: which is that creativity today is in the style, but it can also be expressed through other things.”

Nash, a Fashion East alum, expressed his ongoing preoccupation with freedom of movement but here pivoted elegantly to using the sponsor’s non-synthetic fiber in a way that spoke to the characteristics that explain why it is so popular amongst sheep: its warmth, its breathability, and its ability to wick and remain odorless. He also created some wonderful jacquards that refigured the colors of the Guyanese flag, reflecting his heritage, as abstract landscapes, plus created some novel hybrid trench coats in weather-sealed wool that featured ingeniously removable shoulder sections that allowed outerwear to pirouette with one movement into evening wear. When I mentioned to Hermès’s womenswear designer Nadège Vanhee-Cybulski that these last pieces had seemed especially sophisticated—even Hermès-sophisticated—she enthusiastically agreed. “It’s about widening the parameters and taking risks,” she said: “and I think Saul, the winner, has taken big risks.”