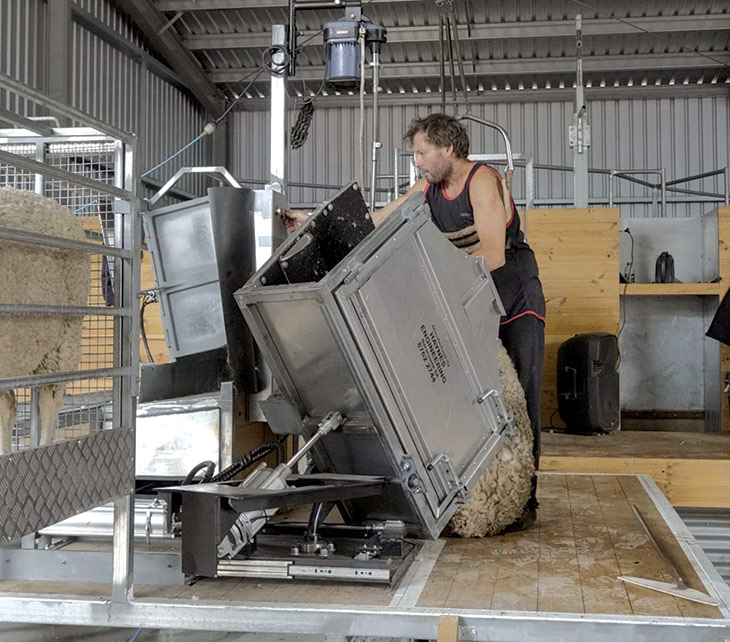 The AWI project to develop a system that delivers sheep directly to the shearer, thereby eliminating the catch and drag from the pen, is progressing well. In addition to the ‘automatic module’, a simpler and cheaper ‘manual module’ is also being developed.

The modular sheep delivery unit being developed will not only eliminate the time and energy that shearers spend having to walk to the pen, catch a sheep and drag it back to the shearing stand, but it also minimises the chance of injury to the shearer from the dragging and twisting movements.

The design focuses on a ‘modular’ concept in which portable singular shearing stands can be joined together to make a multi-stand shearing platform, which can be stored away after use. Each modular unit holds three sheep in a race at the back of the unit. A dummy pen is fitted onto the end of the race to assist with the flow of the sheep.

As previously announced in the September 2021 edition of Beyond the Bale, an automatic module is under development that contains a pneumatically powered delivery section that, at the press of a button, moves out from the race and then tilts the sheep into a position suitable for the shearer to then easily retrieve the animal.

However, there is also a manual module under development. The delivery race is very similar to the automatic module’s race, except that in the race there is a simple gate, in place of the automatic delivery section. The shearer simply opens the gate and collects the sheep from the race and manoeuvres the sheep the metre or so to the centre of the board before starting shearing.

For both modules, an angled shoot allows for simple release of the shorn sheep underneath the race – again without significant dragging or twisting.

Further development and testing of the modules continues.