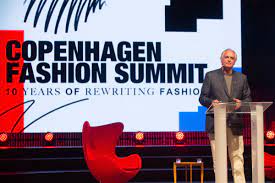 Circularity, carbon, community and pre-competitive collaboration, the four C’s of sustainability, dominated this year’s Global Fashion Summit in Copenhagen. The resounding message? Urgently needed progress is reliant on the industry working together to achieve it.

“To go faster, the entire industry has to be mobilised behind sustainability targets,” says Francois Souchet, global head of sustainability and impact at New York consulting and communications agency BPCM, who attended the summit with 900 members of the fashion industry across Kering, the United Nations, Burberry and Nike. If it wasn’t already clear that sustainability is incredibly complex, this summit proved it, he says.

This year’s theme was “alliances for a new era” but high-level pacts and promises can only go so far, says Fashion Innovation Agency’s Moin Roberts-Islam. “Bold, visionary statements give the industry a North Star, but they often don’t change the situation on the ground. Real progress will come from brands collaborating with their competitors and meeting solutions providers, sharing successful case studies for others to learn from and replicate.” To this end, many criticised a lack of diversity, and particularly speakers from within the supply chain, at the forum.

The fashion industry does have several alliances at play, but they are disjointed and mostly voluntary. The Fashion Pact, which includes over 75 groups and companies, with brands from Gucci to Chanel, has promised to stop global warming, restore biodiversity and protect the oceans, but is not legally binding. Similarly, the UN Fashion Industry Charter for Climate Action has levels of membership, with some signatories committed to its clauses and others for whom implementing change in their own supply chain is not a condition of entry.

There were some positives: universal standards and shared industry values were core to the GFA Monitor, a new report to guide fashion brands towards a net positive industry by the event organiser, Global Fashion Agenda (GFA). GFA also unveiled the Global Circular Fashion Forum, a global initiative to scale the recycling of post-industrial textile waste in textile manufacturing countries. Supply chain transparency and traceability platform TrusTrace released an open-source traceability playbook in collaboration with campaigning organisation Fashion Revolution and Amsterdam-based change agency Fashion for Good, whose partners include Kering and PVH.

But there is work to do. Hotly discussed topics were decarbonising the supply chain, sustainability in the metaverse and garment worker rights. Challenges that persist include a lack of funding for significant change and representation from the communities on the frontlines of fashion’s impact.

Several major fashion brands took the opportunity to introduce new business models; a common thread was the concept of “timeless design” that is no longer seasonal as a sustainability solution. Ralph Lauren’s new circularity strategy, announced exclusively on Vogue Business, positions seasonless items designed with longevity in mind as a key driver of rental, resale and repair services. At Kering-owned cult favourite Bottega Veneta, CEO Leo Rongone says timeless designs like its intrecciato handbags are core to its founding values. The brand will be re-releasing handbags from previous collections at their original full price, which Rongone says reflects their “enduring value”.

The overall mood was a sense of unity after a turbulent pandemic period — this marked the first in-person event in two years. Whether that will move the needle remains to be seen, and participants agreed that more diverse voices are still needed at the table. “We all turned inward during the pandemic,” says Allbirds head of sustainability Hana Kajimura. “It has been great to see the big picture again, and get a pulse on where the rest of the industry is.”

A bombshell came from Liz Ricketts, founder of The Or Foundation, a non-profit based between the US and Ghana, which advocates for environmental justice and awareness around the impact of thrown-away fashion burdening Kantamanto market in Accra, Ghana, such as the crushing physical impact on women carrying bales of clothes, and the 40 per cent that remain unsellable, often diverted to Ghana’s shores and landfills. The Or Foundation will receive $5 million annually for three years from fast fashion retailer Shein — recently reported to be worth $100 billion — as part of the brand’s Extended Producer Responsibility Fund.

“We have been calling on brands to pay the bill that is due to the communities who have been managing their waste, and this is a significant step toward accountability,” says Ricketts. “What we see as truly revolutionary is Shein’s acknowledgement that their clothing may be ending up here in Kantamanto, a simple fact that no other major fashion brand has been willing to state as yet.

The audience response was mixed, with critics pointing out that this is pocket change for a company the size of Shein, and it isn’t sufficient to donate without changing the business model creating waste in the first place. “You can’t run a permanent programme on $15 million, especially over three years,” says Joanne Brasch, special project manager at the California Product Stewardship Council.

Sustainable fashion writer and advocate Sophie Benson summed up the complexity neatly. “The Or Foundation’s agreement with Shein does not represent an endorsement of the brand’s practices,” she says. “We should not be celebrating Shein for doing the absolute bare minimum in mitigating its impact and it doesn’t excuse the waste it creates or the harm it causes. But the money will prove vital in supporting and furthering The Or Foundation’s work, and those who are not on the ground doing that work have no place criticising them for accepting the money.”

Adam Whinston, Shein’s global head of ESG, said via email that the partnership is about transparency. “Through this agreement we acknowledge that some of our clothing may be ending up in Kantamanto, and other markets like it. This acknowledgement is a first step toward our goal of industry-wide reckoning.”

Funding climate action was another running theme. The Apparel Impact Institute announced a $250 million Fashion Climate Fund, backed by H&M and Lululemon. The fund is aimed at decarbonisation, and will finance initiatives throughout the supply chain, from transitioning to renewable energy to scaling next-generation materials.

Others made individual commitments, in the hope of inspiring more brands to follow in their footsteps. Copenhagen-based Ganni, whose founders hosted select attendees for a dinner in their home on Tuesday night, brought three next-gen ‘fabrics of the future’ – Mylo, Stem and Circulose – to market, with limited-edition releases aimed at supporting material innovators to scale.