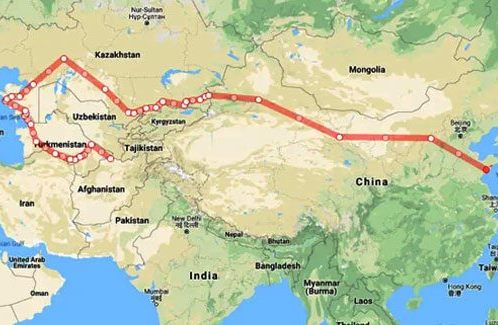 A new rail freight route from Wuxi in China’s Jiangsu Province near to Shanghai on China’s east coast, through Kazakhstan to Uzbekistan has begun operations, with more than 1,000 tons of goods. These included regionally manufactured household appliances and auto parts, with a total value of US$ 4.4 million in Uzbekistan, where the cargo is expected to be delivered within 20 days.

The freight train will depart from the Lianyungang Port, on the Jiangsu coast south of Qingdao. A Kazakh logistics terminal has been operating in Lianyungang Port since 2014, which collects products manufactured in the Jiangsu region (and beyond) in China, and then transfers them to rail which then heads west across China, through Kazakhstan and now, on to Uzbekistan.

The transit costs of Kazakhstan’s trade with East Asia are significantly reduced, and distance from Kazakhstan to Japan reduced by 2500 km and onwards to Singapore by 3900 km. Kazakhstan mainly imports vehicles and its parts, mechanical equipment, electrical appliances, plastic, and rubber from East and Southeast Asia, and exports mainly wheat.

What is interesting about the concept of Lianyungang Port is that it has been chosen to specifically provide services to Central Asia and has specific facilities allowing it to specialise in just this area. Perhaps less well known than the nearby Shanghai and Qingdao Ports, it has developed considerably over the past 20 years and is one of the top ten ports in China and in the top 30 worldwide.

Most of the routes from China to Europe pass through Kazakhstan, and as China is expanding its economic outreach to Europe, Kazakhstan wants to benefit from transit fees and new export markets as it diversifies away from oil dependency. The route is known as the ‘New Eurasian Land Bridge’ and in addition to Kazakhstan, connects with other countries in Central Asia and the Middle East, including Iran and onto the INSTC and Europe.

The new onward route to Uzbekistan marks a milestone in the development of Lianyungang Port as a service centre for China’s Central Asia trade and illustrates how the Belt and Road Initiative continues to expand routes throughout Eurasia. For Uzbekistan, this also means new connectivity to China’s eastern seaboard and markets in Japan, South Korea as well as to Singapore and Southeast Asia.