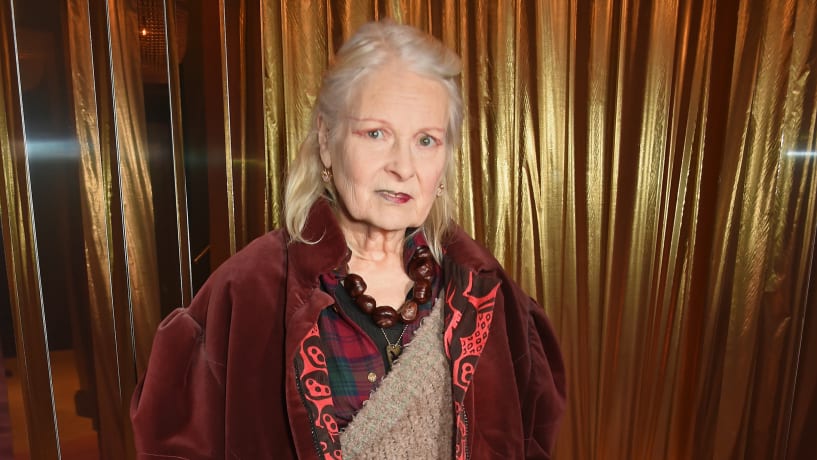 British fashion designer and style icon Vivienne Westwood has died aged 81. She passed away peacefully, surrounded by her family, at her home in London, according to an official statement from her eponymous company.

To the media, she was “the high priestess of punk” and the “Queen of Extreme.” To the fashion world, she was a beloved character who energized and pushed the boundaries of the industry until her death.

She twirled sans culottes for photographers after receiving her Order of the British Empire from the Queen in 1992. In April 1989, she made the front cover of Tatler magazine, dressed in an Aquascutum suit she said was intended for Margaret Thatcher.

Westwood, frankly, didn’t give a hoot. As the oldest of ingénues with periodically orange-tinted hair and alabaster complexion, she rose disgracefully to the revered status of British national treasure.

“I have an in-built perversity,” Westwood’s reported to have said, per Jon Savage’s seminal “England’s Dreaming: The Sex Pistols and Punk Rock,” “a kind of in-built clock which always reacts against anything orthodox.”

She was born Vivienne Isabel Swire in Derbyshire, England on April 8, 1941. Her mother worked as a weaver at local cotton mills; her father came from a family of shoemakers. She began making clothes for herself as a teenager.

After a term at Harrow Art School, she worked as a primary school teacher, and married a factory worker, Derek Westwood, in 1962.

But everything changed when she left her husband, and met Malcolm McLaren in 1965.

“I felt as if there were so many doors to open, and he had the key to all of them,” she told Newsweek in 2004.

It’s impossible to imagine 1970s Britain without their creative partnership. McLaren managed the Sex Pistols and from a shop on London’s King’s Road, Westwood helped develop a visual grammar for the punk movement.

The shop changed names — Let It Rock; Too Fast to Live, Too Young to Die; Sex; Seditionaries — but you couldn’t escape its impact on the street.

“It changed the way people looked,” Westwood told Time magazine in 2012. “I was messianic about punk, seeing if one could put a spoke in the system in some way.”

Her clothes ranged from fetishistic bondage gear to massive platform shoes and slogan T-shirts. Seditionaries famously sold a t- shirt showing the Queen with a safety pin through the royal lip.

Westwood eventually moved on. In 1981, at 40, Westwood launched her first catwalk collection with McLaren. The gender neutral clothes evoked the golden age of piracy, highwaymen, dandies and buccaneers. Westwood studied old tailoring techniques and subverted them, an approach later imitated by other British designers like John Galliano and Alexander McQueen.

Over the course of the decade, Westwood drew inspiration eclectically from Keith Haring, “Blade Runner” and the French Foreign Legion.

She introduced the mini-crini (combining the tutu and Victorian crinoline), flesh-colored tights with modesty fig leaves and signature corsetry worn as outerwear; she designed frocks for women with breasts and hips (ask Nigella Lawson or Marion Cotillard, who both wore Westwood to dramatic affect); she would experiment with Harris tweed and tartan.

John Fairchild, then the all-powerful editor of Women’s Wear Daily, conferred his blessing in 1989. In his view, she was one of the six most influential designers of the 20th century, along with Yves Saint Laurent, Karl Lagerfeld, Giorgio Armani, Christian Lacroix and Emanuel Ungaro. Westwood was the only woman, the only Brit, and the only designer on his list who was not already a multi-million-dollar brand. (In 1989, she was still living in an ex-council flat in South London and was “virtually bankrupt,” according to Jane Mulvagh’s 1998 biography, “Vivienne Westwood: An Unfashionable Life.”)

Style writer Peter York summed her up in a 1990 documentary: “All the things that fuel her, and all the obsessions she builds her work around are typically British: The whole thing about class and sex, the particular obsession with the Queen. You couldn’t develop those anywhere else.”

In 1992, Westwood married an Austrian design student, Andreas Kronthaler, 25 years her junior. They worked as co-designers, before he took over her ready-to-wear line in 2016. In a statement released with the announcement of her death Kronthaler said, “I will continue with Vivienne in my heart. We have been working until the end and she has given me plenty of things to get on with. Thank you darling.”

Tributes began pouring in Thursday night from around the world. Model Bella Hadid posted photos taken with the designer on Instagram and wrote, “I will forever be grateful to have been in your orbit, because to me and most, in fashion and humanity, you, Vivienne, were the sun.” British Vogue editor-in-chief, Edward Enninful, also paid tribute on his Instagram, describing the designer as “a true icon of British fashion and an irreplaceable force in the industry.” And on Twitter, singer Boy George wrote “R.I.P. to the great and inspiring Vivienne Westwood who lead us through punk and beyond,” adding, “she is the undisputed Queen of British fashion.”

Westwood was a passionate activist on issues that ranged from the climate to free speech. Westwood was an outspoken advocate for the planet, often promoting quality over quantity when it came to fashion consumption. For her Fall-Winter 2019/2020 show at London Fashion Week, Westwood sent models, actors, and activists down the runway with political signs — one of which read “What’s good for the planet is good for the economy.”

She often took part in environmental demonstrations, and in 2015, memorably rode a tank to then British Prime Minister David Cameron’s constituency home to protest against hydraulic fracking. In June 2020, Westwood, dressed in yellow, suspended herself in a giant birdcage to protest the extradition of WikiLeaks founder Julian Assange outside Britain’s central criminal court.

The Vivienne Foundation, a not-for-profit company, founded by Westwood, her sons & granddaughter in late 2022, will officially launch next year. According to her spokespeople it will “honour, protect and continue the legacy of Vivienne’s life, design and activism.”