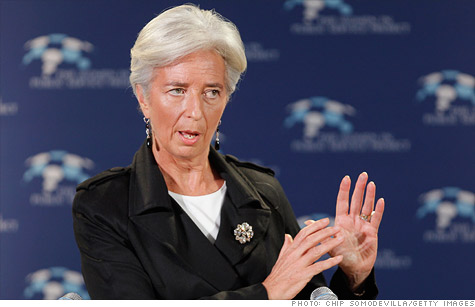 NEW YORK (CNNMoney) — The global economy remains fragile and it should be the United States that takes the lead on creating a lasting recovery, the head of the International Monetary Fund said. “Now is another moment for U.S. economic leadership,” said IMF managing director Christine Lagarde in a speech to the Associated Press.

Lagarde acknowledged that the global economy has improved in recent months, pointing to signs of stabilization in Europe, as well as stronger economic growth and hiring in the United States.

But she cautioned that the financial system in Europe is still “under heavy strain” and that debt levels are “too high.” The global economy is also threatened by high unemployment and rising oil prices, she added.

“The recovery is still very fragile,” said Lagarde. The former French finance minister said it is “crucial” that global policy makers “finish the job” of rebuilding the global economy “and not lapse into complacency or insularity.”

“We cannot afford the luxury of staying in our own mental backyards,” she said.

In particular, Lagarde called on the United States to continue to support economic growth domestically, which she said will help the global economy recover.

“Perhaps more than any other country, the United States is intertwined in this global nexus, affecting — and being affected by — developments all across the world,” she said.

Lagarde suggested that central banks should continue to boost activity by keeping interest rates low, especially in advanced economies where inflation remains low. She added that governments should also use fiscal policy to support economic growth “wherever possible.”

While most countries need to bring down debt over time, Lagarde argued that a “undifferentiated rush to austerity will prove self-defeating.”

The United States, which enjoys low borrowing costs, “should not move too quickly” to cut government spending, according to Lagarde.

At the same time, she said the United States needs to fix its debt problems over time by slowing the growth of entitlement spending and raising more revenue.

Lagarde called on the U.S. government to do more to ease the burden of the 1.5 million homeowners who are delinquent on their mortgages. She pointed to steps the Obama administration has outlined, including mortgage write downs and steps to ease refinancing.

Meanwhile, the IMF director also appealed to the international community to support the fund as it seeks to raise $500 billion to address an estimated $1 trillion in funding needs over the next few years.

“Today, the world needs the IMF more than ever,” she said, adding that the multinational institution “can provide a circle of protection against global turbulence.”

To do this effectively, she added, “we need more resources.”

The United States is the largest shareholder of the 187-member IMF, which lends money to nations in need and helps maintain the stability of the global financial system.

But the U.S. government has made clear that it believes the IMF has sufficient funding.

Eurozone nations recently pledged to provide €150 billion in bilateral loans for the IMF, and Japan has also suggested that it could provide additional resources.

The Group of 20 major economic powers said earlier this year that European leaders needed to finalize their firewall before the group would make a decision on IMF funding.